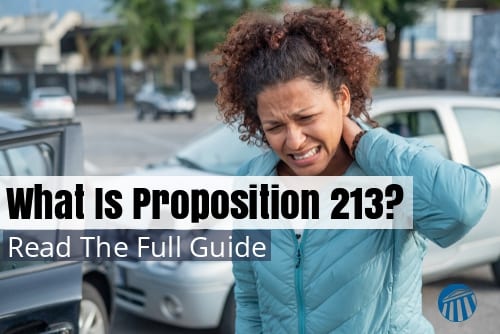 Auto accidents are on the rise and there are people out on the roads that do not care about other drivers. These kinds of people should not be able to sue to get financial reimbursement for pain and suffering. Their negligence and unwillingness to obey insurance laws and to have auto insurance is the reason why CA proposition 213 was established in California. This law protects insured drivers and penalizes those that refuse to play by the rules. Here are some of the things that you may not have thought about prop 213.

Proposition 213 and What It Means to You

The previous law allowed a person to sue the other driver for injuries. They were able to sue for things such as lost wages, medical expenses, and even amounts that were for alleged pain and suffering. These ridiculous lawsuits were the reasons why insurance costs rose to high levels.

Prop 213 and Those Affected by the Law

The people that are most affected by prop 213 are uninsured drivers. When an accident happens, and the person is not insured, prop 213 kicks in to govern the accident. The uninsured driver will not be able to get compensated for any losses that not economic in nature. The law also extends to those who drive under the influence of alcohol.

Exceptions to the Law

Every law has exceptions that must be considered. Prop 213 has the following exceptions to it.

Proposition 213 has a purpose to protect people that abide by the law and carry auto insurance from being exploited by those that refuse to obey the laws and carry their own insurance. They can no longer make a profit at someone else’s expense. Every driver that is not at-fault in an accident has the right to full indemnity. There are times when an accident lawyer may be needed. In that case, it would be a good idea to enlist their services to know what your rights are under prop 213.